There are 16 species within 7 familes represented in this order of sharks. Lamniformes are fairly diverse. Some are well known like the Great White and at the same time, very little is known about some of them, like the Megamouth. They range from the familiar in appearance to downright bizarre.

The smallest is the Crocodile shark, which only reaches lengths of 3.5 feet or so. It has huge eyes which enables it to find prey in the dark depths. It’s jaws are often mistaken for those of baby makos. Although they look nothing alike, DNA studies have shown that the Megamouth is closely related. 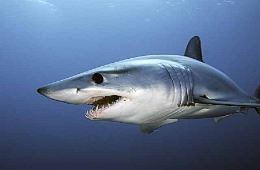 The Megamouth was only first discovered in 1976 when it was entangled in the sea anchor of a Navy ship off the coast of Oahu, Hawaii. As the name implies, this shark has a huge mouth that is situated well forward on it’s head. The teeth are very small on this filter feeding shark. To date, only about 33 have been discovered. Believe it or not, the Basking shark belongs to the same group of sharks as Makos and Great Whites. This swimming mouth is the world’s second largest fish. It’s noticeably huge gills that extend almost around its entire girth allow it to strain thousand of gallons an hour for plankton. They typically spend a lot of time near the surface feeding as if basking in the sun. They have a fairly large, conical snout that is most noticeable in younger sharks. No snout is as large or as bizarre like that of the Goblin shark. It has a long, paddle like snout that is loaded with the electro-sensory organs, ampullae of Lorenzini. Studies have suggested that it uses the snout as a prey finding mechanism and with the help of it’s highly protrusible jaws, it can easily grab unsuspecting prey that happens to swim to closely. Thresher sharks, may also use a part of the body as a tool for capturing food. It has been suggested that the long, whip-like tail is used in rounding up prey in the open ocean. The upper lobe of thresher sharks is almost as long as it’s stout body. The Bigeye Thresher for its HUGE eyes that extend to the top of the head. There are two other species of thresher sharks -- the Bigeye being the largest. Threshers shark share a common trait with the members of the Lamnid family. They are endothermic, or warm-blooded. The Great White, Makos, Porbeagles can maintain body temperatures as much as 25 degrees warmer than the surrounding water. In short, being warm blooded makes them stronger and able to venture into colder waters to find calorie rich prey they need to keep this internal heater working.

There are two species of mako sharks and Porbeagles. Of course, we have the mighty Great White and some confusing sandtiger sharks, but more will be written about these sharks as time permits.