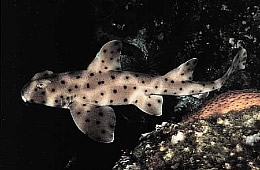 There are 10 different species using the same genus, Heterodontus. Commonly called Bullhead sharks, they are an odd looking bunch. They don’t grow to be very large – the largest, the Port Jackson shark growing to 5 1/2 feet. The smallest, the Galapagos bullhead only grows to about 2 feet. The all have a small snout that resembles that of a pig. Their very small mouths conceal jaws that have small grasping teeth in front and smooth grinding teeth near the rear. The name Heterodontus means just that –‘different teeth’. The teeth are specialized for eating crustaceans and mollusks. Another obvious characteristic of this species, are the two fin spines on each of its dorsal fins. These act as a fairly effective defense mechanism. In at least one instance caught on film, a California angel shark promptly regurgitated a small horn shark that it tried to swallow.

Horn sharks are nocturnal hunters and stay close to the bottom, sometimes using their pectoral fins to clamber about. When resting, many tend to wedge their head into a crevice or rest in groups. Their prominent brow ridges are covered in large dermal denticles which probably help protect their hard heads like a helmet.

Bullhead sharks lay unusual, auger shaped eggs and wedge them into crevices for safe keeping until they hatch after a 5-12 month gestation period. Some species lay eggs with long tendrils that tangle themselves around kelp, thus anchoring them.

Most of the specimens we offer are from the Eastern Pacific where they are utilized commercially.