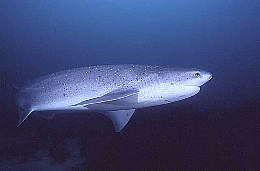 This order includes some of the most primitive looking sharks that swim in our oceans today. If fact, the teeth of the Frilled shark closely resemble those of Phoebodus, which dates back to the Carboniferous Period – over 340 million years! The teeth of all hexanchiform sharks can be found in the fossil record dating back millions of years. Besides teeth, one of the other ‘primitive’ features is the presence of six or seven gill slits. The Frilled shark, so named by the wavy or ‘frilly’ edges of its gill slits, is eel like in appearance and somewhat resembles the ancient shark, Xenacanthus.

Due to the very deep water that Hexanchiform sharks inhabit, little is known about these mysterious sharks. As far as I know, the pictures of the Frilled shark on this page are the only live images I have seen of this shark. 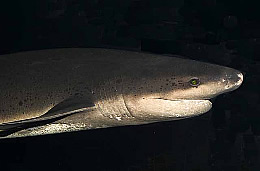 Although the Bluntnose Sixgill has been known to reach depths of just over 6000 feet, it does migrate to shallower water at night and has been observed and photographed. It appears to be sensitive to light and its migration to shallower water is short lived – returning to the depths before sunrise.

In British Colombia, however, it seasonally enters shallower water making it possible to learn more about this usually elusive shark. The Broadnose Sevengill on the other hand, inhabits shallower water thus making observation and study possible. More is know about this cowshark than any other hexanchid. One fact is its aggressiveness. In captivity it has bitten divers and may be responsible for some attacks on swimmers. Human remains have been found in one individual, but it isn’t know whether the shark actually attacked this person or was just scavenging. 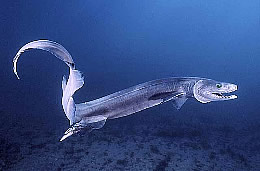 Last but not least are the two smallest cowhsarks – the Bigeye Sixgill (Hexanchus nakamurai) and the Sharpnose Sevengill (Heptranchias perlo). The Bigeye Sixgill only grows to about 6 feet and has very large green eyes. Also, it only has five teeth on each side of its lower jaw. That’s one way to distinguish the shark if you only have the jaw to look at.

FossilsOnline is proud to able to offer jaws from all of the sharks that belong to this order.