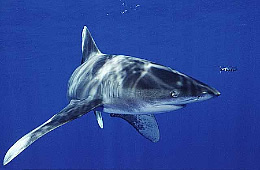 This order of sharks is the largest and is made up of well over 250 different species which includes the catsharks, weasel sharks, hound sharks, requiem sharks and the odd looking hammerheads. They range in size from the diminuative catsharks – some of which only grow to about 12 inches, to the tiger shark which is the largest carcharhinid, growing to a length approaching 18 feet. They are widespread and found in just about every marine habitat. At least one, the Bull shark is know to venture into fresh water. One was caught in Illinois – about 2000 miles up the Mississippi and another equally as far up the Amazon river in Peru! There is also a population that lives in Lake Nicaragua in Central America. This stocky shark is considered to be one of the most dangerous sharks to humans – just behind the Great White and tiger shark. The Oceanic Whitetip and Blue shark are two of the three open water carcharhinids. The OWT (Carcharhinus longiramus) has a body style similar to that of a Bull shark except for it’s very long pectoral fins – hence the species name, longiramus. Blue sharks also have long pectoral fins, but their bodies are more slender. Their jaws, although very capable, are not as stout as those from oceanic whitetips or bull sharks. These pelagic sharks are more widespread and are not encountered as often as other sharks.

There are about 140 or so species of catsharks. They are mostly on the small side and some that belong to the genus Apristurus, are found in deep water. Some catsharks are an important food source so their jaws, although difficult to identify, are available quite often. Included in this group are the swell sharks. As a defense mechanism, the swell shark will swallow large amounts of water and inflate itself much like a puffer fish to fend off potential predators. 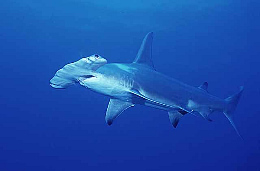 The smoothhounds, weasel sharks and houndsharks comprise about 58 different species. Many are commercially important and are often available. The houndsharks belonging to the genus Mustelus don’t have teeth like you would expect a shark to have. They are a crushing type dentition similar to those of rays and guitarfish.

Hammerhead sharks are probably the most recognizable group of sharks. There are 8 species of hammerheads, each with a differently shaped head. The odd shaped head is shaped much like a wing of an airplane which may help in ‘lift’ since they are one of the most negatively buoyant sharks. The electro sensitive pores called ampullae of Lorenzini are scattered throughout a larger area on the bottom of the hammer which helps them locate prey better than other sharks. I have seen video of a hammerhead shark scanning the bottom of the ocean like a tourist scanning the beach with his metal detector – only the prize wasn’t lost pocket change but a meaty morsel that was hiding in the sand. Their nostrils are located on each end of the hammer and have special grooves that channel water into them. Having their nostrils so much further apart than most sharks may enable them to smell prey items easier from further distances.

Carcharhinids of all sorts are used thorough the world as a food source, so the jaws from many species are available.