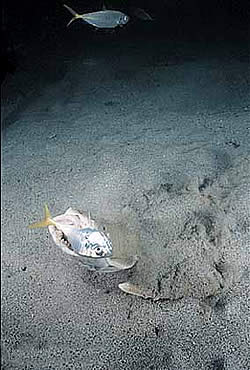 There are 18 species of angel sharks worldwide. This shark has a flattened body and somewhat resembles a skate. Unlike skates, they have pectoral fins that are not completely attached to the side of the head and their mouth is at the front of the head instead of the bottom. One unusual physical feature of angel sharks (besides the fact they are flat!) is that the lower tail lobe is larger than the upper lobe unlike other sharks. They are ambush predators and will lye in wait partially covered with sand until a fish swims within reach. The speed at which this sharks moves is amazing. In a split second it springs from the bottom and uses it’s sharp grasping teeth to grab its unsuspecting prey and swallow it whole. Perhaps the larger lower lobe is an adaptation that helps it spring up quickly from the sand. Most sharks need to swim constantly in order to move enough water over their gills to keep from suffocating. The angel shark is able to pump water over their gills and out through holes (spiracles) on the top of it’s head in order to lie motionless on the bottom waiting for lunch to swim by. Some have been observed to stay put for over a week!

Physically, they all are very similar. They range in size from about 2 feet to more than 6 feet in length. They also range in depth from shallow coastal regions to over 4500 feet for the Atlantic angel shark, Squatina dumeril.

They are used as a food fish throughout the world and up until the early 1994 when the directed gillnet fishery for them was closed in California. They are still caught for food in California, but with hook and line. With the cooperation of a fisherman, we are able to obtain full data on each Squatina californicus jaw we offer.