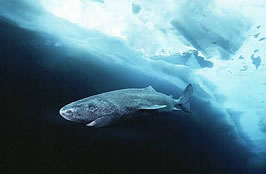 This family of sharks is the second largest with 115 species. It can also be described as a family of extremes. Squaliform sharks include the smallest, one of the largest, the deepest and the most abundant.

Reaching a maximum length of less than 8 inches, the Dwarf Lanternshark is the smallest shark in the world (as far as we know). The other shark that held this record, the Spined Pygmy Shark, is only .2 inches larger.

For the extreme opposite in size, the Greenland shark takes the prize as one of the largest predatory sharks on the planet. Yes, the benign looking Greenland shark ranks right up there with the mighty Great White. Once thought to be very sluggish, evidence and research shows that this shark is quite the hunter; often consuming fast swimming fish and even marine mammals. There is even an account of a reindeer being found in the stomach of a captured Greenland shark. 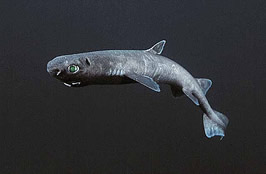 In general, squaloids tend to be deepwater sharks. A research submarine diving in the Gulf of Maine had an encounter with a Greenland shark in 3000 feet of water and Spiny Dogfish (Squalus acanthias) have also been recorded of reaching similar depths, but at an amazing 12,057 feet, the Portuguese Shark (Centroscymnus coelolepis) holds the record for the greatest depth attained by any shark.. Although this shark has larger eyes for its size and has dark coloration, it is very similar to the giant Greenland shark in that it’s teeth are nearly identical in shape It’s body shape is also similar.

This brings us to the what is probably the most abundant species of shark. The Spiny Dogfish (Squalus acanthias) supports a huge commercial fishery in many parts of the world. In a five year period from 1996-2000, 50.6 MILLION pounds of this shark were harvested in British Colombia. Aside from being consumed for food, the shark is also used for study in many biology classrooms worldwide.

Since this shark is commercially important, we often have several species on hand, some with full data.